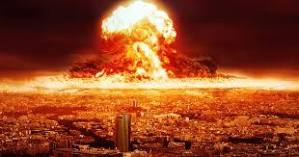 I am sure that the title of this message will make no sense to you as a Jew. How you may ask can the term Holocaust apply to God let alone to YOU?

When you hear the word Holocaust you immediately think about Nazi Germany and the atrocities committed to multiple millions of people, let alone 6 million Jews.

But the Old Testament speaks of other Holocausts. What about the entire population of the world prior to the Flood? Scientists speculate upwards of a Billion people died in that flood.

Scriptures tell us that every imagination within the heart of mankind was evil and so GOD destroyed civilization with the exception of Noah and his family…a total of only 8 human beings. I would say that holocaust was the greatest ever in human history, wouldn’t you agree?

But there is coming two more Holocausts’, maybe in your lifetime. One for the Nation of Israel and the other for all of Mankind.

The final Holocaust will come for all of humanity before a Holy GOD who came first 2,000 years ago to die on the Cross-as the Lamb of GOD for the sins of the world. But now comes back as the Lion of the Tribe of Judah, with Fire in His eyes, without Love, but ONLY Judgment for all the people on the planet who did not accept HIM as their Savior and Lord.

You hear about God as a loving father that knows and cares about humanity. The God that knows when even a sparrow falls to the ground. Yet there is another side to God that stems from His Holiness. God is Holy and cannot look upon your sin.

The Bible says you are a son or daughter of Adam and you were born with flawed SIN-DNA and a dead spiritual heart filled with Sin. That means unless you rectify your spiritual condition and get a new spiritual heart that you will experience the righteous anger of God.

The Bible says not to fear those that can kill your body. But fear the one who after you physically die can condemn you to Eternal Death in Hell.

The rabbi’s rarely speak about Gods Anger, because they believe Jews are exempt from it. They think in their hearts that Jews are righteous before their God. That righteousness, is earned through good works, and giving charity.

Yet the Old Testament speaks of one more Holocaust in the Book of Zechariah Ch. 12-14 for the Nation of Israel. It describes a World war, including every nation on earth against the State of Israel. God will send the Messiah Yeshua / Jesus, the SON of GOD to defend the Nation of Israel against ALL the nations that will come against Jerusalem, including the USA.

The Messiah will destroy every army from every nation as they come against His Holy City Jerusalem. But God will allow 2/3 of the Jews to perish saving only 1/3. Only a few, the remnant who believe in Yeshua / Jesus, will live. That remnant will look up as the heavens open and see Yeshua / Jesus the Messiah, the Son of God, the One Crucified to come down to save them.

The text in Zechariah says, “They (the remaining 1/3 of the Jews) will LOOK UP and SEE (Recognize), HIM whom they have PIERCED”.

YESHUA / JESUS the Son of God will bring the Final Holocaust of humanity at HIS SECOND COMING. HE comes with FIRE in HIS EYES and JUDGMENT for every human being on this planet that has not accepted HIM as their SAVIOR and LORD.

TODAY is the DAY OF SALVATION and TOMORROW could be the DAY YESHUA / JESUS COMES BACK with FIRE in HIS EYES.