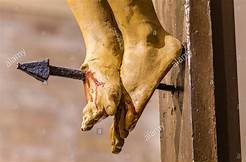 Of late I have had the distinct dis-pleasure of meeting fellow Christians who stated that ONLY their denomination understood and followed the correct interpretation of the Bible.

They made it clear to me what they believed and that they were right and the rest of the denominations were wrong.

They stated clearly what parts of the Bible they accepted.

I thought it was;  ALL Gods Word or not Gods Word at all!!

When I am asked about which denomination I belong to I say…”I am not a Baptist, Methodist, Presbyterian, Catholic, Lutheran, Pentecostal, Charismatic, Eastern Orthodox or Messianic Jew.

I follow the original. The One True Church made up of Born again Christians and Born Again Jews. My worship and my allegiance is to the One Founder of the One True Faith…Messiah Yeshua, Jesus The Christ.

You will find me daily before HIS CROSS on my face in the Judean dirt before His Nail Pierced Feet.

HIS Church began at the Cross and has remained the same for 2,000 years…Salvation by Faith Alone, by Grace Alone, In Christ Alone!

We do not add bodies to his church…HE ALONE builds HIS CHURCH.

Together each of us belongs to an Ancient Faith. Together we are HIS called out ones…His Church…His Ecclesia…His Temple made up of Living Stones.

I hope the walls that separate us will come down some time in the future. I hope we will focus on sound doctrine. I hope every Church that claims Christ will preach not only about His Love, but also about His Coming in Judgment, which is the real reason to FEAR THE LORD.

I hope we stop arguing about who among us is right. So once and for all we can act like family…for that is what we are…Brothers and Sisters in Christ…CALLED  by HIM to LOVE One Another.

Focusing on our differences and defending our points of view especially when we cannot support them by the Word of God… is wrong!

The Apostle Paul set the pattern for ALL Believers 2,000 years ago…Preach His Crucifixion, His CROSS and His Resurrection and the hope we have as believers established solidly in the fact that He is Coming Again Soon But ONLY for HIS Ecclesia!