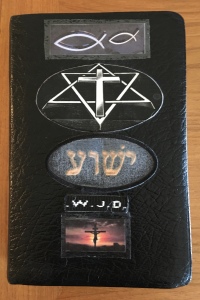 Will You Receive a Copy of The NEW ETERNAL BIBLE ?
The Bible prepared for Gods Children made up of Born Again Jews and Christians

Did you know that God has been waiting to launch His New Version of the Bible for 6,000 years? This New Bible will soon be available to read but only by Born Again Believers in JESUS. Those who were pre-destined for Heaven, before the Universe was created.

Those whose story was written before they came out of their mother’s womb. God has pre-written the story of your Eternal Life as well.

Here is the Very First Sentence of the Coming New Bible.
“In the NEW Beginning GOD RE- Created the Heavens and Earth.”

Let’s take a moment to review Scriptures in the Old Version.

And God said, Let there be light and there was light.

He came to what was his own, but his own people did not receive him. But to all who have received him—those who believe in his name—he has given the right to become God’s children — children not born by human parents or by human desire or a husband’s decision, but by God.

Now the Word became flesh and took up residence among us. We saw his glory—the glory of the one and only, full of grace and truth, who came from the Father.

“I tell all of you the solemn truth—you will see heaven opened and the angels of God ascending and descending on the Son of Man.”