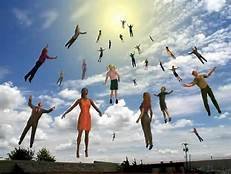 How Many Times Must YOU Read IT To BELIEVE IT ?
This is NOT Your Best Life Now !

1 Corinthians 15:52
In a moment, in the twinkling of an eye, at the last trumpet; for the trumpet will sound, and the dead will be raised imperishable, and we will be changed.

Matthew 24:31
HE will send his angels with a loud trumpet call, and they will gather HIS elect from the four winds, from one end of the heavens to the other.

John 5:28
“Do not be amazed at this, for a time is coming when all who are in their graves will hear HIS voice.

1 Thessalonians 4:16 & 17
For the Lord Himself will descend from heaven with a shout, with the voice of the archangel and with the trumpet of God, and the dead in Christ will rise first. Then we who are alive and remain will be caught up together with them in the clouds to meet the Lord in the air, and so we shall always be with the LORD.

Ask most people about the Word of God and the first thing you will hear is that it is too hard to understand. There are too many words, too many themes, and too many different concepts to wrap our minds around.

There are too many examples of imperfect people used to try and teach us about perfection. It just takes too much time to devote to reading it…and then who is going to interpret it for us?

And so they cannot get beyond the first 3 pages of any of the Bibles books, let alone take on the daunting task of reading the book in its entirety.

Many of these people have a passion for reading. In fact they read voraciously. They can read one novel after another with no problem.
This happens because the novels appeal to their passions, their raw emotions as humans filled with lust, greed, arrogance, pride and a multitude of sins that filled the dregs of the cup that Christ drank and died for on the Cross.

But to read the only book that was written personally to each of them by the God of the Universe…well that’s just too much effort; even though this book tells them who God is, who they are and the choice they have to make that will determine their future.Its obvious to me that everyone has an opinion on the Book that God wrote and they are very vocal about that if asked.

In the end most everyone is risking their eternal destiny on the opinions of others rather than taking the time to explore Gods Word for himself or herself. These people could care less about absolute truth or the consequences of ignoring this truth.

God has made His Word SIMPLE and EASY to understand not complicated and unknowable. He uses an economy of words that explain concepts of great depth so all people can understand what HE means. Rest assured that God always means what He says and says what He means.

YOU….WE …are all without excuse!