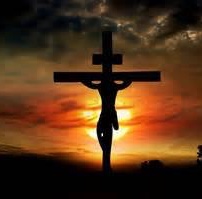 The sky was black; the world was shrouded in darkness. Lightening flashed giving glimpses of the Crown of Thorn’s embedded into the head of Christ. It was a surreal scene lit up by the Black Lightning that came and went showing sharp movements of His head and contortions of HIS face like a sadistic movie scene.

He turned His head and looked up to the sky. One last time He raised Himself up by pushing from His feet that were nailed one on top of the other into the tree and then pulled His body upward with His nail pierced hands.  He drew His last breath, filling His lungs to capacity. Then Jesus screamed forth a blood-curdling cry into the darkness.

“It Is Finished”, was heard resonating and echoing throughout the universe, throughout all of His Creation. His cry was Heard by Angels, Heard by Demons, Heard by Man and Heard by His Father. This was His heart cry of victory. His work of Redemption was finished. Mankind now had a way to enter Heaven.

At the same time His Voice was heard throughout the earth and heavens; His Father took His finger and tore open the veil before the Holy of Holies in the Temple in Jerusalem. It was the same finger that wrote the 10 commandments into stone on Mt. Sinai that now tore open the veil that had separated sinful man and a Holy God from each other. Now sinful man had a way to approach a HOLY God.

The way in was through the advocate appointed before the foundations of the world were ever made. Jesus the Lamb who was slain. Jesus who died for my sins on that Cross.  Jesus, the Son of God.

It seems today that the veil that God had torn open 2,000 years ago has been sewn back together by some gatekeepers, some watchmen on the walls, some preachers who have taken it upon themselves to place stumbling blocks in the paths of True Believers. Those stumbling blocks have nothing to do with Salvation. They are dogmatic stumbling blocks that cannot be defended by Scripture.

WHY…. because the pastor usurps ALL the PRAISE, HONOR and GLORY that belongs to YESHUA …alone !