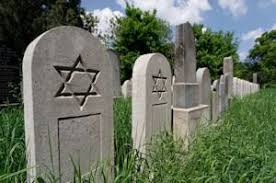 I found myself looking down at my Aunt’s headstone. There were people crying all around me, her daughter, and her son, and her grandchildren…my first cousins, all recognizing this moment in life that is so bitter for us all.

Then they went through the prayer for the dead. I recalled saying the very same prayers for my Father and my Mother before I became a believer in Christ.

And then the rabbi said to us that God has taken my Aunt into heaven because of the many mitzvah’s, good works she had done that God now counted to her Soul as Righteousness.

Then I thought again of the veil covering the eyes, and hearts and minds of the Jewish people.

NO ONE can be Righteous before God who is Holy, Holy, Holy.
You CANNOT earn your way into heaven. It says that in the Old Testament and its even clearer in the (Jewish) New Testament.

As everyone repeated the Prayer for the Dead, I was praying as hard as I could that God would lift the veil, on that day, off of those standing around me at the grave site. Pleading in my heart of hearts that my family would no longer be Blind and Deaf having no Discernment of the Words of God written in their Old Testament.

I prayed that God would lift the veil so they might see their Messiah, Jesus the Son of God lifted on High.

That they would be able to step out of the long, tragic line of people that do not know Christ as their Savior and Lord. THE LINE, that began formation outside the Garden of Eden, and has continued throughout history to this day, and until Jesus Comes Again.

THE LINE, that forms mankind’s Holocaust, allowed by Almighty God
because GOD WILL NOT LOOK UPON SIN!