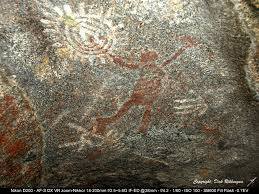 The old one’s day began early with the dawn. Clothed in animal skins he walked out from among his people; out from the inner recesses of his cave dwelling towards the Sun light.

He paused at the cave mouth and turned back to his people as they knelt to the ground. Then on their behalf he moved out of the shadows into the light to greet the gods they served.

The old one was the priest of his people. It was his responsibility to pray at the dawning of each day to the visible gods of the Sun, Moon, Stars, Rain, and Fire. Then he prayed to the unknown god; the Wind that came as it pleased and went without his knowledge. He could feel its touch, but the god remained invisible.

Look closely at this old one. He stands in the sunlight with arms raised to the sky, chanting and praising the creation, answering the shrill cry of an eagle overhead. Look behind him; there attached to his foot is the shadow of the darkness from the cave that clings to his body as he moves forward into the sunlight.

Man has come a long way since those days. Do we still worship the Earth and its elements? Not the way the Old One did, but yes we do. Are we still god Hunters? Yes, but now we do it more intelligently. Out of the depths of the darkness of our own minds we have created multiple major and minor religious systems with differing worldviews.
Yet with ONE Voice man says there is ONE god for all mankind. That all religions worship this ONE god.

However, the god we find described within each religious system made by man is radically different from the god within each religion. Of the gods of Christianity, Hinduism, Islam, Buddhism, Judaism, and Mormonism; there are no common attributes that would lead you to believe they were one and the same god.

And so it is that man continues daily to strive towards the light, with the darkness never leaving him for it clings to his every step filling his soul with shadows, darkening his mind and reasoning abilities.