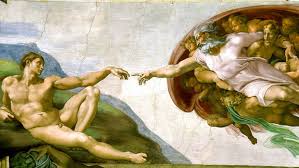 “Then the LORD God formed man of dust from the ground, and breathed into his nostrils the breath of life; and man became a living being.”

I am most fascinated by Gods creation and His forming man out of the dust of the earth.

His creation is vast, encompassing everything from the Universe to our own planet Earth. We know very little of His Creation except for the Revelation He has chosen to give us in His Word. That revelation is about Him and His plan to save us from ourselves through repentance while realizing our need for the salvation His Son Jesus offers us from His Cross.

Therefore the drama of good and evil is unfolding according to the will of GOD, and is being played out on the one planet that God has chosen…our Earth. Earth in essence is the center of Gods Universe, the battleground of Gods choosing to bring evil to its pre-determined end forever.

This Earth will be cleansed by fire and remade brand new again. Then the two realms of Heaven and Earth will become One Again as God had planned from the beginning of Creation.

He has made mankind in His Image, a little higher than the angels. However at this time in our imperfect state before Him, God refers to us as “but dust”.

Let’s go back in time for a moment to when God made Adam the first man. God reached down into the earth and gathered a handful of dust from which He would create the first man. God is omniscient meaning He knows the future. He knew that there would be a day coming when He would have to sacrifice His only begotten Son on the Cross to offer salvation to the race of mankind.

So when God gathered the dust to form the first man, it was His tears that wet the dust to turn it into clay as God molded Adam into His Image. These were the first of the many tears of God because He knew what the cost was going to be to His beloved Son JESUS on the Cross. He knew that He would have to turn away from the cries of His Son on the Cross-when Jesus roared “My God, My God…Why have you forsaken me?”

Yet God made Adam anyway from the dust mixed with His Tears. Then as Adam awoke a new creation…the first man…Adam stood and stretched his arms out as all of us do when we awake.

And the light that reflected from God upon the first man created a shadow of the Cross behind the man. God’s eyes looked upon the dust that Adam was made of and tears filled the eyes of God again.

The Shadow of Mankind’s Cross would be there every morning in this land filled with both light and shadows till the end of mankind’s days.

If only every person made in the image of God could come to know JESUS during their journey in life so the weight and burden of the beam could be lifted and carried by their SAVIOR.