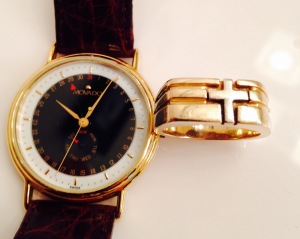 Interesting phrase. You can read it and actually get two different thoughts. Are we talking about Time itself or are we making a statement about an EXPECTATION of SOMEONE Who PROMISED to COME SOON? OR can the statement apply to both?

The picture on the left is my watch. Please note that the center is Black and there is a small ring of white around it. The other picture is of the ring I had made many years ago that I wear on my right hand. When I became a believer in 1985 my wife Elyse gave me a gold Cross that I have never taken off my neck. That Cross is precious to me. Years ago as a young Jewish boy, I wore a Mezuzah that contained the Scripture the Jews refer to as the Shema in Deuteronomy 6:4. “Hear, O Israel! The LORD is our God, the LORD is One ! I received the Mezuzah at my Bar Mitzvah. You will also find it posted within the door way of an Orthodox Jewish Home. When I was 17 years old I lost my Mezuzah. A Sign of things to come.

Later in my journey to faith after my Father died I learned that the English word ONE in the Shema was Echad in Hebrew. Echad means a Unity of One Kind or Essence. That Hebrew word for ONE meant that the ONE TRUE GOD of Judaism was somehow more than ONE? That HE in FACT IS a Plural Entity.

Years later I had the ring designed and now just like the Cross around my neck I wear the ring on my finger. The ring has become a witnessing tool that the Holy Spirit continues to use in my life. I wear it with the Cross facing towards me. People have asked why not the other way. I tell them it’s because first and foremost the Cross is a daily reminder to ME about who I am in Christ. Then it becomes a witnessing tool to explain who I am in Christ to people.

But the latter is not what the picture of my watch and my ring say to me.
Time began in the Garden of Eden with the fall of Adam & Eve. But the END of TIME began at the CROSS. JESUS shouted out from the Cross “IT IS FINISHED”; putting both the world of Mankind and the Angelic Realm on notice that Time is now running out…FALLEN Time has an END.

My watch has an inner circle of black and a narrow circle of white surrounding it. The inner circle represents the growing darkness all around us that is quickly consuming mankind. The white circle represents the light that is left for mankind’s existence on earth. I am reminded every day that your time if you are an unbeliever is running out. And you are one step away from the mouth of Hell. And I do not want you to go there so I look for opportunities daily to share my faith with you.

My ring reminds me of Christ breaking forth from the Tomb. When JESUS took HIS first Step as the Risen LORD onto Judean Soil, FALLEN Time took its last breath. FALLEN Time will receive no more oxygen. FALLEN Time is now holding its breath waiting for the Darkness to overtake the light. At that future moment Light will break forth in the EASTERN SKY again. But that light will bring with it an ETERNITY of TIME. That light will be the LIGHT of The MESSIAH of ISRAEL JESUS The CHRIST in HIS GLORY as KING of KINGS coming back to TAKE BACK JERUSALEM, the CITY of GOD ALMIGHTY….not the city of the nation of Israel.

ALL Past, Present and FUTURE Messianic Prophecies are now converging at a pace that FALLEN TIME can no longer keep up with. God’s patience with fallen mankind is over. The DAWN of ETERNITY is HERE. You will have FOREVER to think about what you should could have done when GOD held HIS Nail Scarred Hand out to you from HIS CROSS. You no longer have the time to ignore His BIBLE. It contains the GREATEST STORY EVER TOLD. Whether you like it or not you are part of HIS STORY not your own. JESUS drew a line in the Sand 2,000 years ago ….Which SIDE are You On?